This story is continually developing. If Trump his policies once more, we’ll post an update highlighting the new details.

In January, President Donald Trump loudly declared that pharmaceutical companies are “getting away with murder” with what they charge the government and patients for medications. Unsurprisingly, his statement drove numerous drug stocks down and effectively put executives on notice. Both Donald Trump and Hillary Clinton included their responses to the rising costs of healthcare in their campaign platforms. Trump was much more specific in his, promising to allow drug reimportation in an effort to start a bidding war and to allow Medicare to negotiate special pricing.

As PharmaExec notes, this puts Trump at odds with fellow Republicans. Conservatives seek to scale back the operational costs of the Food and Drug Administration (FDA) and National Institutes of Health (NIH), meanwhile Trump, wants to provide more funding to the resource-strapped FDA to fast-track approvals for generics and imported drugs. Trump may, however, be thwarting his own efforts by rejecting the Trans-Pacific Partnership (TPP), which seeks to harmonize patent policies, creating common standards for clinical trials, and to ensure quality drug production.

Critics of Trump’s stance warn that his policies will stifle innovation and would deprive patients of fair pricing because Big Pharma currently spends more of its budget on marketing than on R&D and people suspect that big corporations will cut R&D costs with uncertain ROI before they cut spending on lucrative marketing.  The controversial relationship between doctors and drug reps combined with recent trends of over diagnosing new and vague diseases for which drugs are readily prescribed has opponents scared that easy profits will ‘trump’ expensive innovation.

It could also discourage foreign investment in drug companies and potentially force them to relocate overseas. That would be the situation the UK is in while Parliament votes on Brexit. While he’s a fan of drug reimportation, a mass exodus of Pharmaceutical companies would deprive the US of a decent chunk of tax revenue. Others warn that drugs with little clinical trial evidence will be approved in order to compete with a one-of-a-kind drug.

Pharma and Biotech executives met with the POTUS following his declaration, and after the meeting, Trump reversed his stance. However, Trump recently returned to his original position of pursuing drug negotiations for Medicare and Medicaid.

Unsurprisingly, each change of Trump’s stance has a large impact on Pharma stocks. When he first reported the need for negotiations, Pharma stocks took a 1.7% hit and Biotech stocks fell by 3%. As reported by Bloomberg, this was the largest decrease of life science stocks since October. 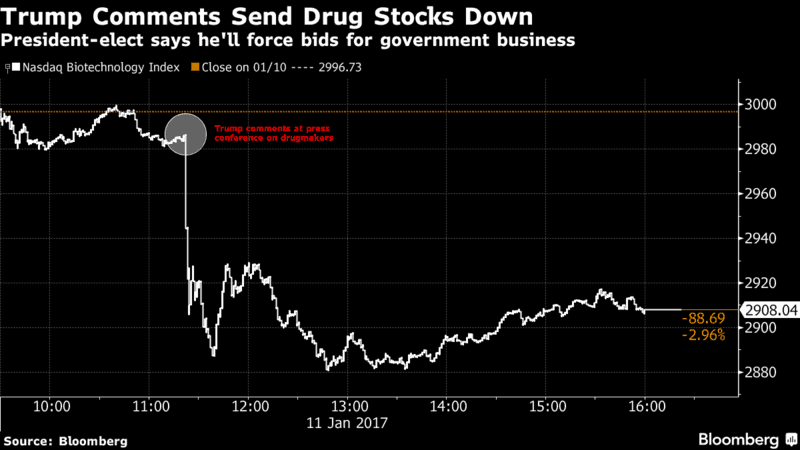 On January 31st, he met with Who’s Who of Pharma at the White House, after which he changed his opinion on the matter. Once again, stocks were affected. From New York Magazine, NASDAQ Biotechnology Index was trending at +1% while Standard & Poor’s 500 (this includes Pharma, Biotech, and Life Science stocks) trended at +0.8%.

A week later, on February 8th, Trump reneged. He returned to his original position of creating a price-bidding competition. FiercePharma has a graph from that day’s NASDAQ losses:

InstantGMP™ PRO is a software solution that could help pharma and biotech manufacturers decrease the costs associated with drug production. Our Electronic Batch Record software takes production and quality to the cloud – no more paper chaos! This lets companies focus on what’s important while decreasing their audit risk. Learn more on how InstantGMP™ PRO can transform your manufacturing by signing up for a live demo.